Dave over at Phugit and myself were discussing the decline of sentence diagramming over AOL instant messenger one night. Who would have guessed that uggabugga would have perfected the art.

To really get the full flavor of these exchanges, you have to do the following (it’s not a huge time commitment, I promise.)

3) Visit Uggabugga for an explanation

This is horrible. Absolutely Horrible.

CAMP BUSHMASTER, Iraq - In this dry desert world near Najaf, where the Army V Corps combat support system sprawls across miles of scabrous dust, there's an oasis of sorts: a 500-gallon pool of pristine, cool water.

It belongs to Army chaplain Josh Llano of Houston, who sees the water shortage - which has kept thousands of filthy soldiers from bathing for weeks - as an opportunity.

"It's simple. They want water. I have it, as long as they agree to get baptized," he said.

I guess our Jewish soldiers, Muslim Soldiers, Atheist Soldiers, Buddhist Soldiers, Hindu soldiers, and Catholic soldiers (“We acknowledge ONE baptism for the forgiveness of sins”) don’t get to clean up. After all, their blood spilt just as the Baptist soldiers.

There is just so much WRONG with this. First of all, we must assume that the water, although clean, is not fit for drinking. Because, if it is, and our troops are bathing instead of quenching the thirst of Iraqis, then there’s the bigger problem.

Apparently I’m not the only one outraged by this. Calpundit, Eschaton, and readers of Media Whores also agree.

Terry Hughes was fired from a Michigan NPR radio station after refusing to play NPR news breaks, instead telling listeners to go listen to Fox News.

Don't worry Terry, I'm sure there's a Clearchannel station somewhere that will pick you up.

This Day in History: April 4th

Phugit brings to our attention that this is the day of Martin Luther King’s assassination, and gives us some comments about it.

The two events are not related.

The RIAA (Recording Industry association of America) is suing several college students for running a peer to peer network on their personal computers.

The problem is that they are suing for HAVING the network, and no mention of copyrighted material is mentioned.

What the RIAA forgets is that it’s not illegal to have a p2p network. For all we know, they could have been trading term papers, or self-designed software programs over the network.

Yea, I know, they PROBABLY were trading copyrighted material. But probably isn't enough reason to bankrupt these kids, and most likely kick them out of school.

Something else of note: They mention a software package called Connect Direct, by Sterling Software. If it’s a sue-able offence to have this, then MOST BANKS in the United states are in danger, as this is the software that transfers EFT (Electronic funds transfer) files.

It’s like blaming the car on the drunken driver.

My usual source of anger and frustration has been missing lately.

You see, the local talk radio station, WTVN is currently changing their online streaming audio service. I haven’t been able to get myself fired up by listening to uninformed central Ohio callers for a couple of days.

Searching for my angst-muse, I stumble across a gem. You might remember WAY back in February The Meatstack posted an article regarding liberal talk radio.

Well, I had to web surf the whole way out to San Francisco, but I found it.

KGO in San Fran is a Liberal Talk radio station. Finally, a voice of reason in the night, streaming live from our Left coast!

Give them a listen to. If you like their work, send them an email and let them know you appreciate them streaming their message across the fruited plain.

The archbishop responsible for Roman Catholics in the U.S. military has assured them that they can serve "in good conscience" despite opposition to the war in Iraq from Pope John Paul II, his cardinals and many U.S. bishops.

I have to question what “Holy See” this man is following. The Catholic Church’s view on this war is quite clear. 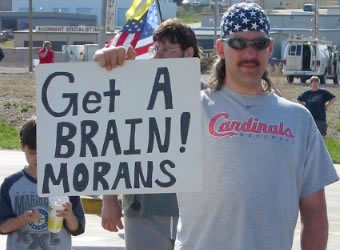 Once again, Bartcop gives us a great shot. (click picture for link)

I guess cardboard doesn’t have a spellchecker function.

Move on has assembled a media watch group, with the onus of keeping tabs on print and media sources. It’s their hope to keep these sources to the idea of fair and balanced reporting.

The first issue that they have brought forth is the AP’s equation that “pro-war” equals “pro-troops”. Although I am not in disagreement that these people support our brave men and women of the United States armed forces, those very same words are left out of “anti-war” rally stories.

If you have five minutes, write the AP and let them know your feelings on this.
----

As a former reporter for print (The Johnstown Tribune-Democrat) and Media (WJAC-TV) I’m writing you today to urge you not to equate “pro-war” rallies with “pro-troops.”

I bring this to your attention because “pro-troops” holds merit on both sides of the debate. The anti-war community has always remained pro-troops, believing the best way to support our troops is to bring them home. Some members of the anti-war movement have family members currently in service. This unfair labeling causes these parents, husbands and wives undue heartache, as their efforts to see their family home safe are being labeled unjustly.

Please consider either dropping “pro-troops” from your verbage, or applying it fairly to both sides of the issue.

Thank you for your time.
Craig
Columbus, Ohio

I had mentioned previously that the World would attempt to boycott American products.

Now, it looks like another Meatstack prediction has come true.

And, like I said in my post of the 2nd of March, These boycotts are having more of an impact locally than here in the United States.

Once again, from Freedom to tinker, apparently a law similar to one that is passing around some states has already been enacted in Pennsylvania.

Lawmakers are stating that they are going to attempt to enact legislation that will ban taxes on internet access.

From the same article, comes a very little, but important tidbit. Currently, States cannot tax “remote” sales. This means that Ohio’s current law, stating that you must claim any purchases made on line, is against the Supreme Court’s decision.

I will investigate that further.

Sunday Commentary: Cleaning up the assignment board

I have had a consistent string of “almost” and “whoops” when putting together my Sunday articles. So, since none of these will stand up on their own as they are, I’ll clean off the Meatstack Assignment Board, and put them up as they stand.

Jim Capazzola over at the Rittenhouse Review has been considering a run against Pennsylvania incumbent Arlen Specter. He’s sort of formed an “exploratory committee” by throwing out the idea, and seeing what bloggers respond.

I’ll be the first to agree that Specter’s time has passed. Do keep in mind, Specter is the same person who threw together the “magic bullet” theory, stating that bullets, when traveling at and through a President of the United States of America, do not need to follow the same rules of physics that the rest of the universe adheres to.

The Meatstack Assignment Desk (Assignment Editor: Ernest) Said to me: “This might be a good piece. Why don’t you contact him and get some background on him?” Good idea Ernest!

So, I attempt to contact Mr. Capazzola via Email. I ask him a couple of questions, trying to get a feel for what he stands for, what his background is, and what he believes.

He replies, quite prudently I must admit, that those questions cannot be answered at this time.

However, The Meatstack cannot support, at this time, a possible candidate whenever we know nothing of him. If Mr. Capozzola decides to take a serious run at Senator Specter, and is willing to provide some background on himself, then The Meatstack will reconsider throwing our support for him.

What if a protest happens, and no one is there to listen?

Saturday morning started like any other for me. Working third shift at my job, I get to bed at approximately 5 a.m. Waking up at 11:30 a.m., I decide to head to to the corner of Broadway and High street in Columbus, Ohio. There is supposed to be a anti-war protest rally happening. Grabbing the camera, dog, and wife (not necessarily in that order) we get into the car, looking for a Sunday story with art. By the time we arrived at 1:15 p.m., the protest had broken up, the participants gone home.

Protest.net lists their events happening from 12 to 1 every Saturday. Another protest is scheduled for Sunday’s from 5 p.m. until 5:30 p.m., with dinner afterwards.

Although both of these groups are, in my opinion, arguing for the right cause, why the short sessions? I’m not suggesting the kind of “die-in” that shut down downtown New York last week, but at least put some heart into it. I’ve been in traffic jams longer than an hour.

And the Sunday protest is just silly.

I applaud what these groups are trying to do. I just wonder about the overall affect of such a short event.